85.   WWII FLYING TIGERS Medal Grouping - 428th Bomb Group - EVADER!
Extensive grouping named to Lt Clune J. CLIFFORD. He was navigator aboard B-24 "FRENDLIM" of the 428th Bomb Squadron, 308th Bomb Group. He flew 97 missions over the hime as well as bombing and staffing missions over enemy targets. ON his 97th mission he was shot down over China. He was MIA for 14 DAYS until he found his way back to his unit and finished the war on occupation duty, Comes with is officially wartime government engraved AIR MEDAL & OLC, officially wartime government engraved DFC with OLC, wartime PURPLE HEART, various campaign medals, ribbon bars, theater made CBI patch, sterling Navigator wings, Meyer shirt size navigator wings, and more. Copies of newspaper articles detailing his being shot down. Also states he had bailed out one time previously! On the last mission, he was strafing a Japanese convoy at 200 ft when they were subject to devastating fire from escorting Japanese destroyers. They hobbled to the coast where their last two engines gave out. the article gives interesting details about his journey back to base, evading the Japanese after being dressed up as Chinese coolies by missionaries. Then completing a 300 mile journey back to base!
$850

Footnote: Clune John "Jack" Clifford was born on February 17, 1920 in Indianapolis, Indiana. He was baptized "John Clifford" and took the name "Francis" as his confirmation name. "Clune" was his mother's maiden name and it was not unusual in Irish families at that time to use the mother's maiden name as their oldest son's first name. He was not aware his first name was Clune until he joined the Air Cadets in 1942. Until that time, he went by Jack Francis Clifford. During his student days, it was necessary to file an affidavit, to prove that Jack Francis Clifford was the same person as Clune Jack Clifford, when he applied for the G.I. Bill of Rights benefits, in order to pay for his law school tuition after his separation from the Air Force in 1946. At the age of two, the family moved to Chicago, Illinois, where he attended St. Ignatius Grammar School and Sullivan High School, where he successfully graduated. He moved on to post-secondary education, attending college at Loyola University for the next three years, where he graduated with a Bachelor of Arts in English Literature in 1942. Clifford was enrolled in Pre-law at Loyola and was a resident of Chicago, Cook County, Illinois, when he enlisted as a Private (676022) with the United States Army Air Corps, on March 26, 1942, sworn in as a "Private Unassigned", his enlistment for the duration of the War or other emergency, plus six months, stating that he was a College Student and that he was Single. He was not called to active duty at Kelly Field in Texas until June, his senior year at Loyola. He had taken several courses in advanced mathematics, including spherical trigonometry, so it did not surprise him that he was selected for navigation training. Over the period of nine months as an Aviation Cadet, he achieved the necessary training to be rated as a "Navigator". He trained for five weeks at Tyndall Field in Florida in Aerial Gunnery, nine weeks at Ellington Field in Texas in Pre-flight Navigation and sixteen weeks at Hondo, Texas in Advanced Navigation Training, receiving his wings in April 1943. He also completed four weeks at Chatute Field, Illinois in a CNT Instructors Course and two weeks at New Castle Army Air Force in Wilmington, Delaware. After finishing his navigation course, he graduated as a Second Lieutenant and was assigned to a crew and trained as a member of that crew. Second Lieutenant Clifford entered active service on April 1, 1943 and would later serve for twenty-one months as a Navigator, in the rank of First Lieutenant. He navigated the plane, a B-24J, from Florida to Yangkai, China, by way of Ascension Island (between Brazil and Africa in the South Atlantic Ocean). He was sent to China, to be part of the 308th Heavy Bombardment Group, 14th Army Air Force. Upon arrival at Yangkai, China on July 27, 1943, the crew was assigned to the 14th United States Army Air Force, 308th Bombardment Group, 373rd Bombardment Squadron.

Their newly acquired aircraft was built by Consolidated Aircraft Corporation at San Diego, Constructors Number 1925. It had been delivered to the United States Army and ferried overseas to China. It was a B-24D-105-CO, Serial Number 42-40848 and nicknamed "Flamingo". Two days later, on July 29th, the crew of eleven flew their first bombing mission together against the dockyards at Hong Kong, which was scheduled to take about nine hours. Clifford was the lead navigator aboard the aircraft, the B-24 equipped with a nose turret and other added fire power, which was ideal for the lead plane in bombing Hong Kong. The crew consisted of: the Pilot and Squadron Commander, Captain William Chenowith; the Co-Pilot, Major Edward G. Schultz; the Observer and Squadron Operations Officer, First Lieutenant Hsu Tung Chow of the China Air Force; the Navigator, Lieutenant Clune J. Clifford; the Bombardier, Lieutenant Donald B. Duffey; the Engineer, Technical Sergeant Charles P. Yelton; the Radio Operator, Technical Sergeant Russell A. Giles; the Assistant Engineer, Staff Sergeant Edward Pawlick; the Assistant Radio Operator, Staff Sergeant Milton A. McGee; the Armorer, Staff Sergeant Max C. Elder; and another Armorer, Staff Sergeant Francis J. Meaney. Once over the target, the formation encountered anti-aircraft fire but no enemy fighters. The B-24 made three bomb runs over the target before releasing its bombs. While in flight, they were testing a new retractable turret, which created excess drag and caused the bomber to run out of fuel near Yangkai, roughly twenty-five miles from base. Around 4:30 p.m., Captain Chenowith radioed the base of the impending danger, along with informing the crew of the dangerous situation, then ordered everyone to bail out. Inside the cockpit, the Observer, Chinese Air Force First Lieutenant Hsu Tung Chow accidentally opened his parachute and was trapped inside. In an effort to save him, the two pilots attempted to make a forced landing into a rice paddy, a few miles south of Yangkai. The landing was perfect, however, the speed of the aircraft combined with the short landing distance, caused the aircraft to impact an earthen berm, which had been built to create a dike. This resulted in the crushing of the nose section and center section of the aircraft, with the tail section remaining intact, the impact killing all three. Killed in Action were the Pilot, Captain William Chenowith, the Co-Pilot, Major Edward G. Schultz and the Observer, First Lieutenant Hsu Tung Chow, China Air Force. After the crash, 373rd Bombardment Squadron personnel were sent to locate the crash site and crew aboard two trucks. A Chinese farmer directed them to the site. The remains of all three were recovered and transported to Kunming, subsequently, no Missing Air Crew Report (MACR) was created. The recovery of the bodies was described by Glenn Roberts of 308th Bombardment Group: "Our flight engineer, Technical Sergeant A.T. Hill and I volunteered to go along and jumped onto the first truck. A Chinese farmer directed us to the crash site. The plane was a mess. When the plane struck the dike, the nose of the plane had been driven back so hard that there was absolutely nothing left, forward of the wing. The inertial effect of the impact had cause things to break loose throughout the fuselage and fly forward. The bodies of Captain Chenowith, Major Schultz and the Chinese pilot were removed and taken to Kunming. Hill and I were directed to remove the two waist guns, load them onto the truck, then remain at the site that night and stand guard, for fear that the local people might start taking things from the ship. When it got dark, it was an eerie feeling to be there. We were nervous and all night long, jumped at any little sound. We hadn’t eaten since noonand were hungry but wouldn’t go inside the plane to search for any K-rations. Hill had half a pack of cigarettes which we had smoked by around 9:00 p.m. It was a very long night. The next morning we thought they would never send a truck to bring us back to Yangkai." After the recovery of the remains, the two deceased American crew members were transported to the United States for permanent burial. Major Edward G. Schultz (April 4, 1896 - July 29, 1943) of Missouri died at the age of 47 and is buried in Arlington National Cemetery at Section 12, Site 3126. The other eight crew members, including Clifford, had bailed out and landed safely. 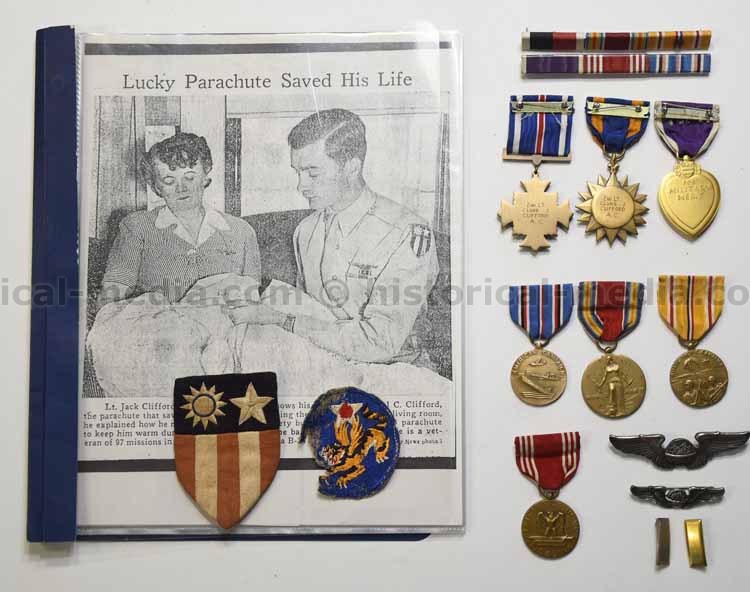 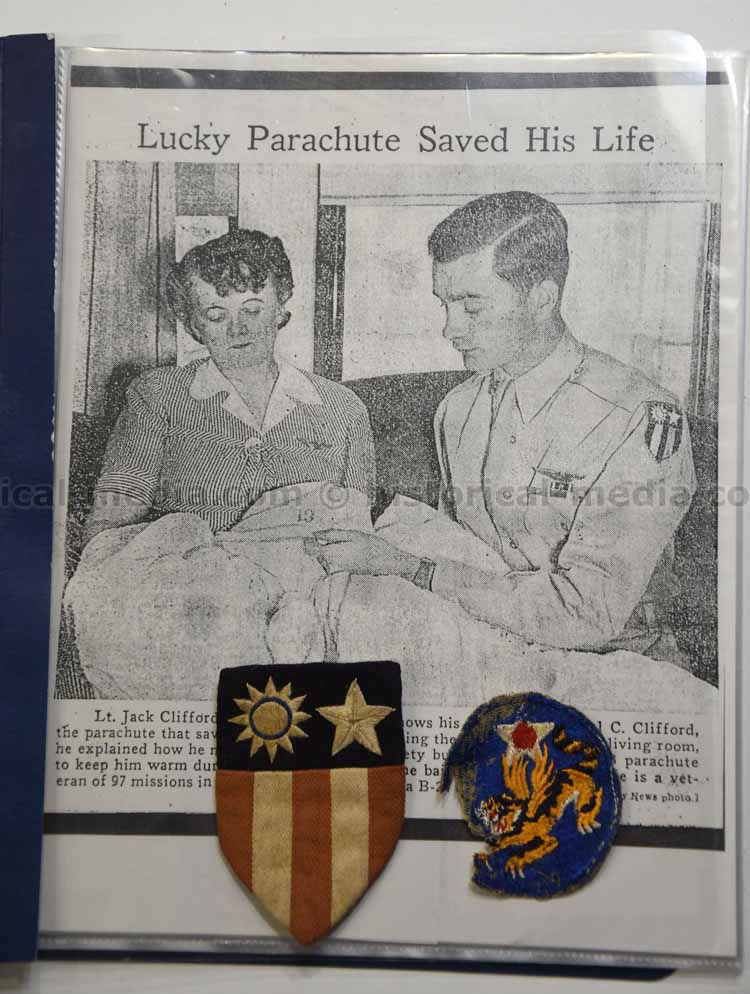 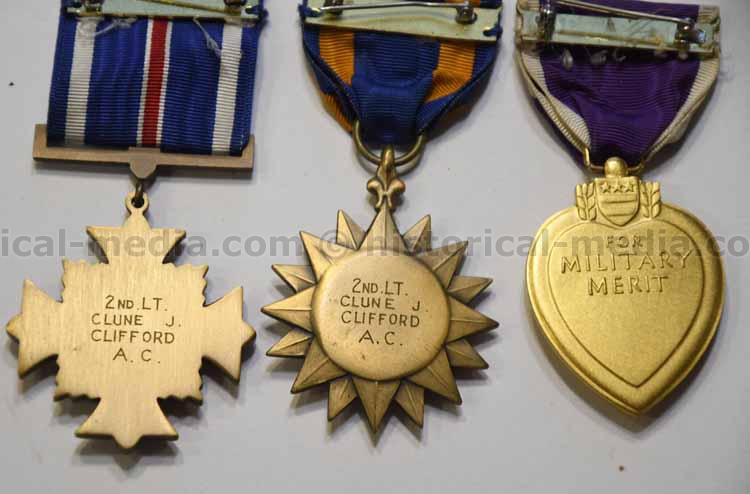 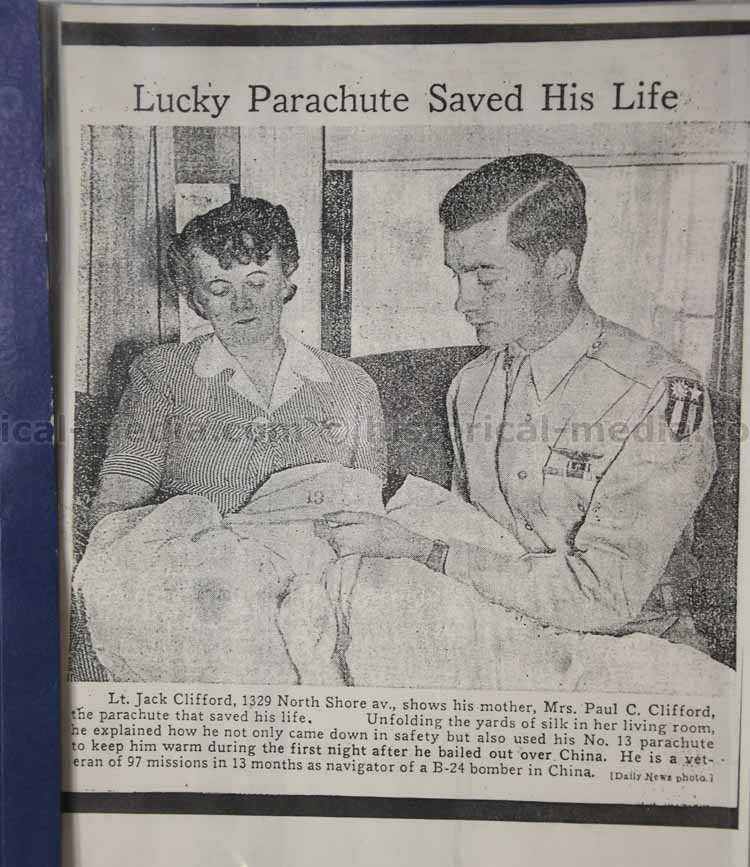 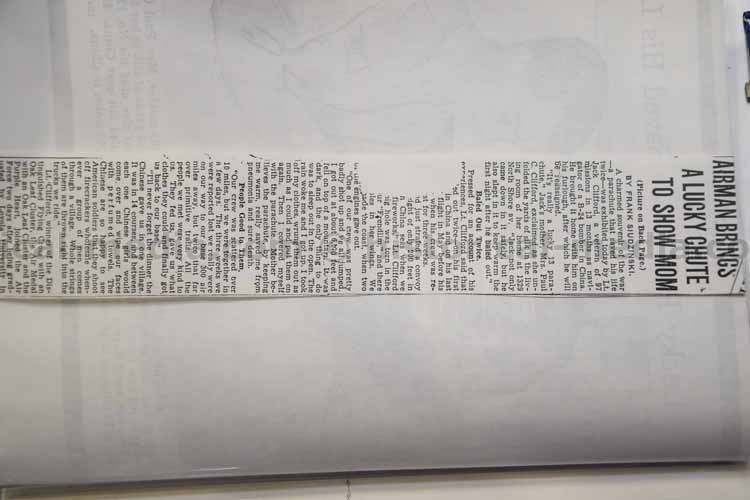 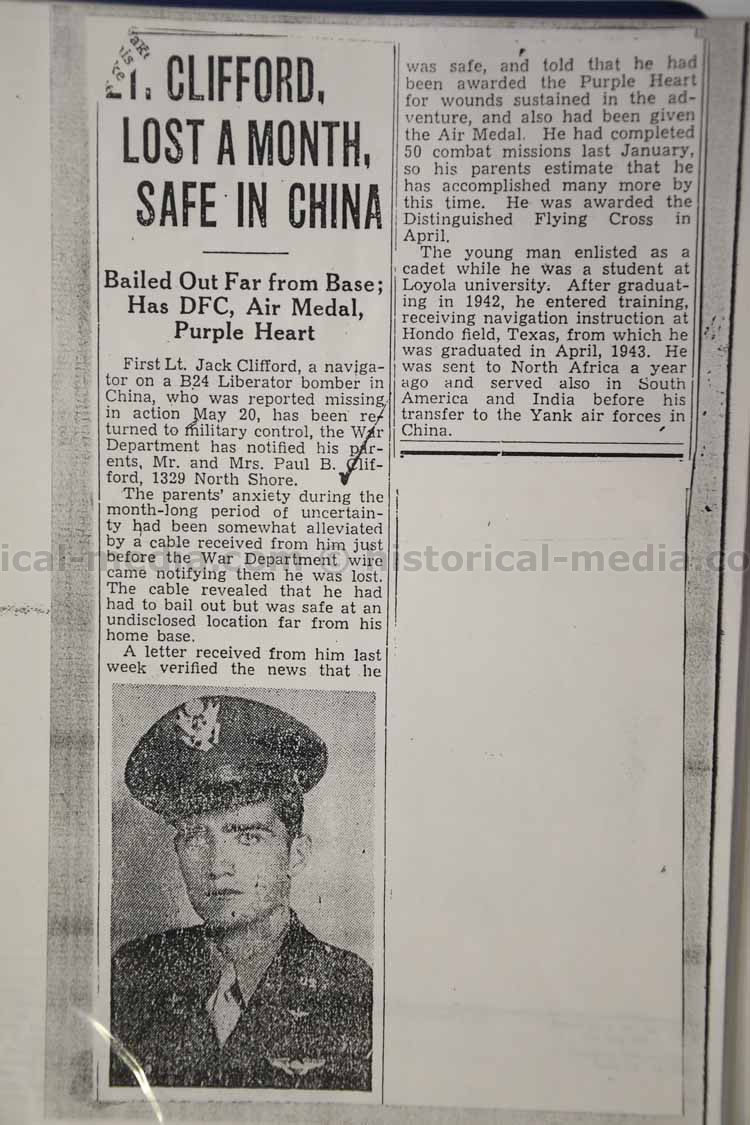 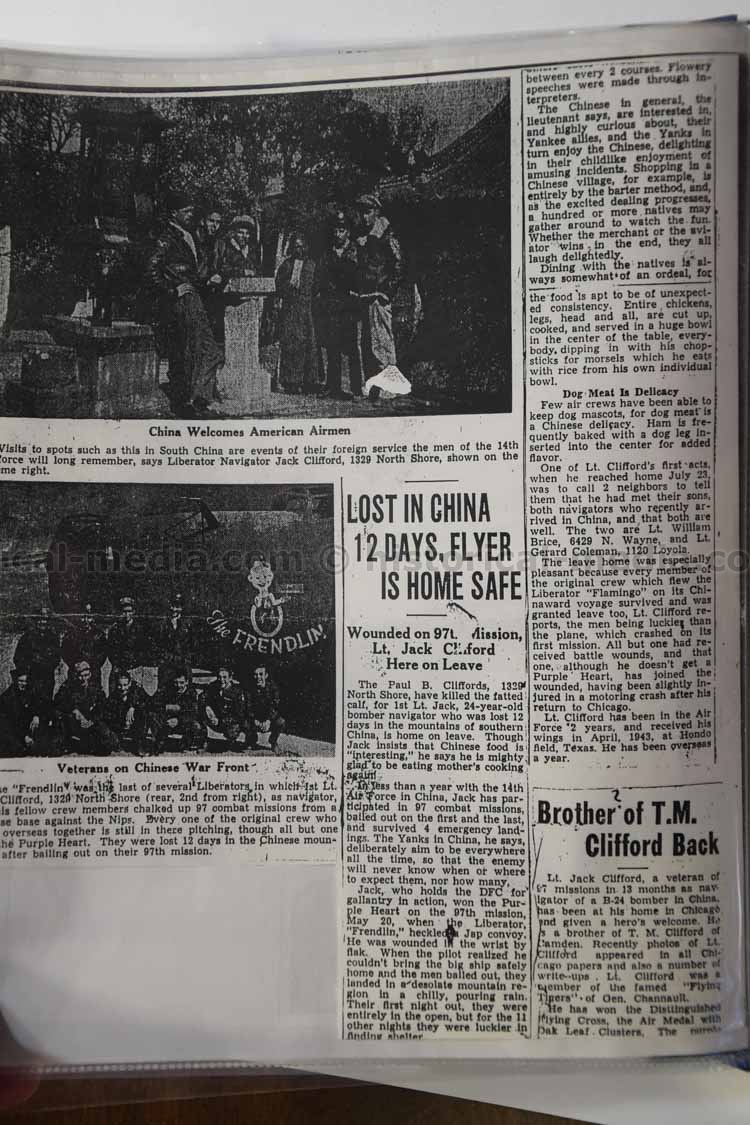 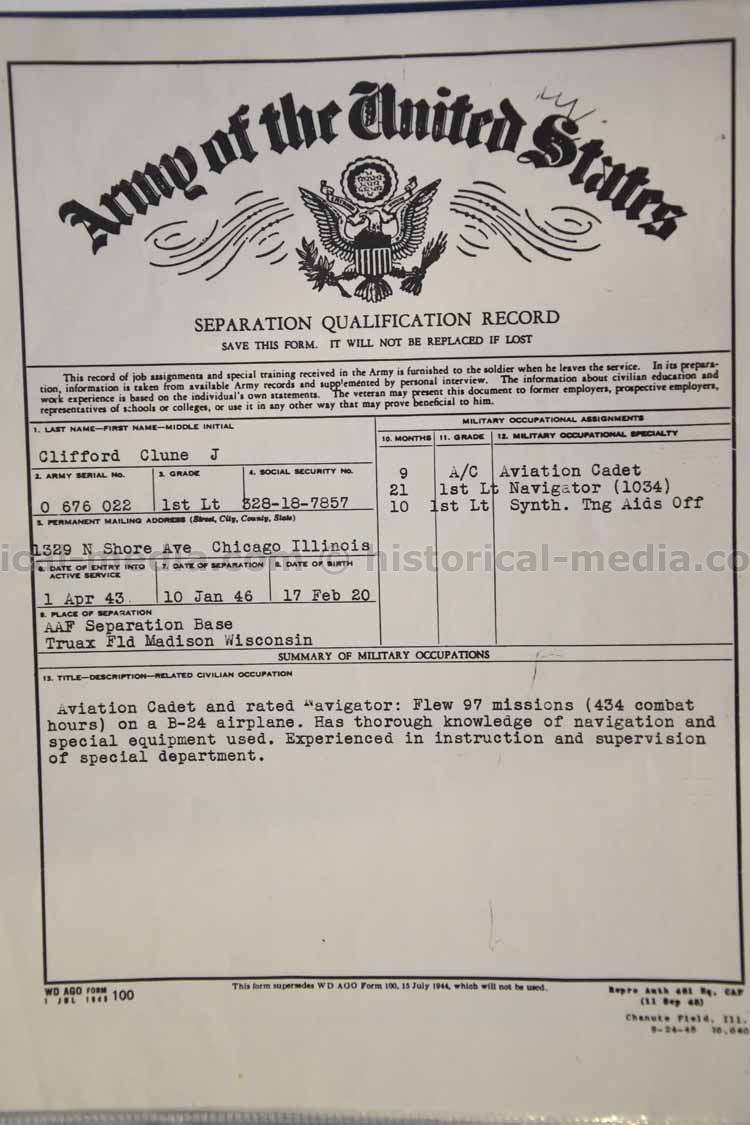 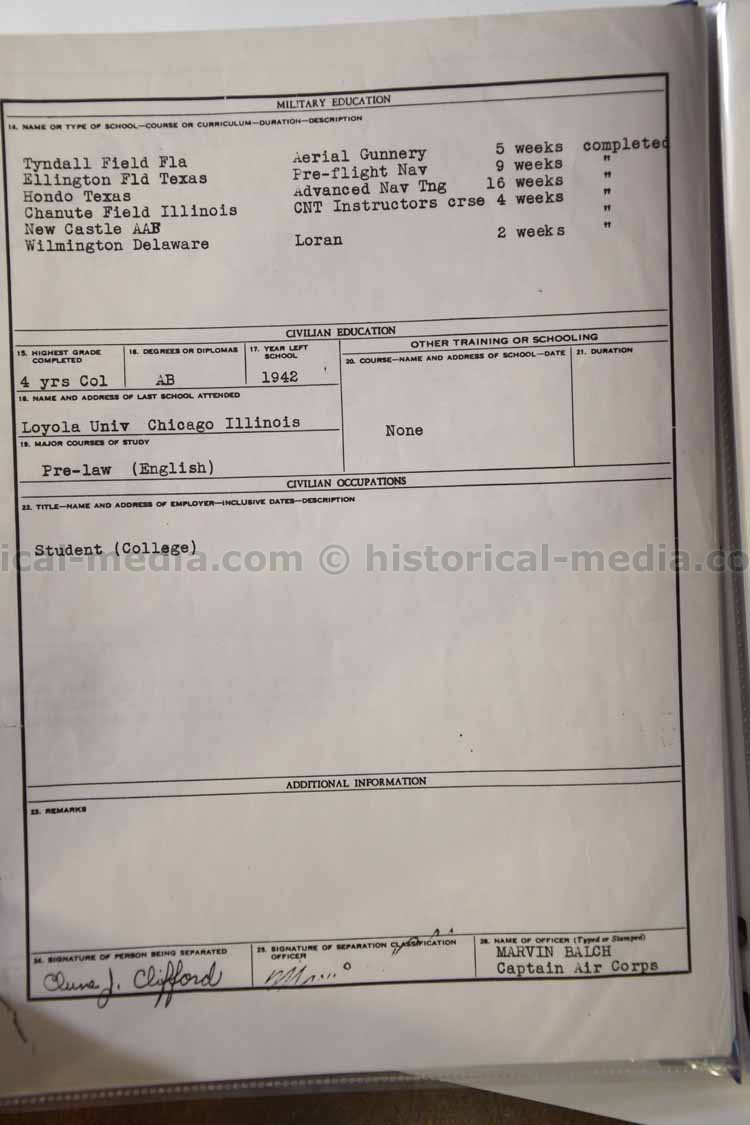 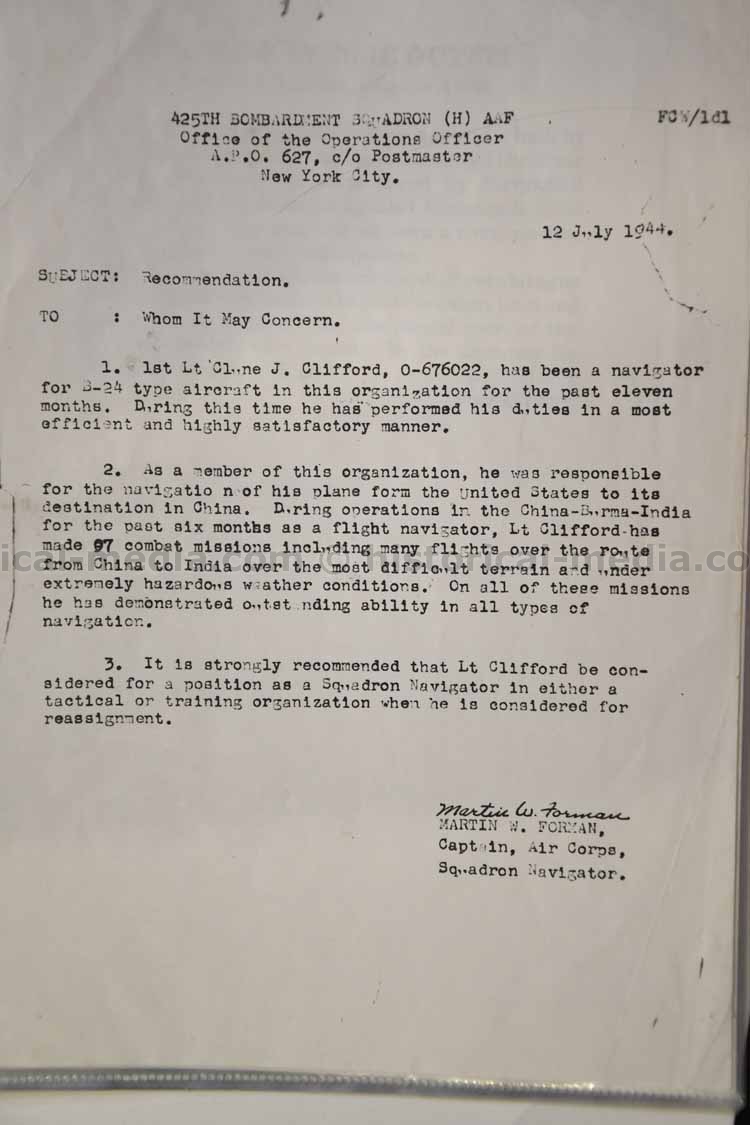 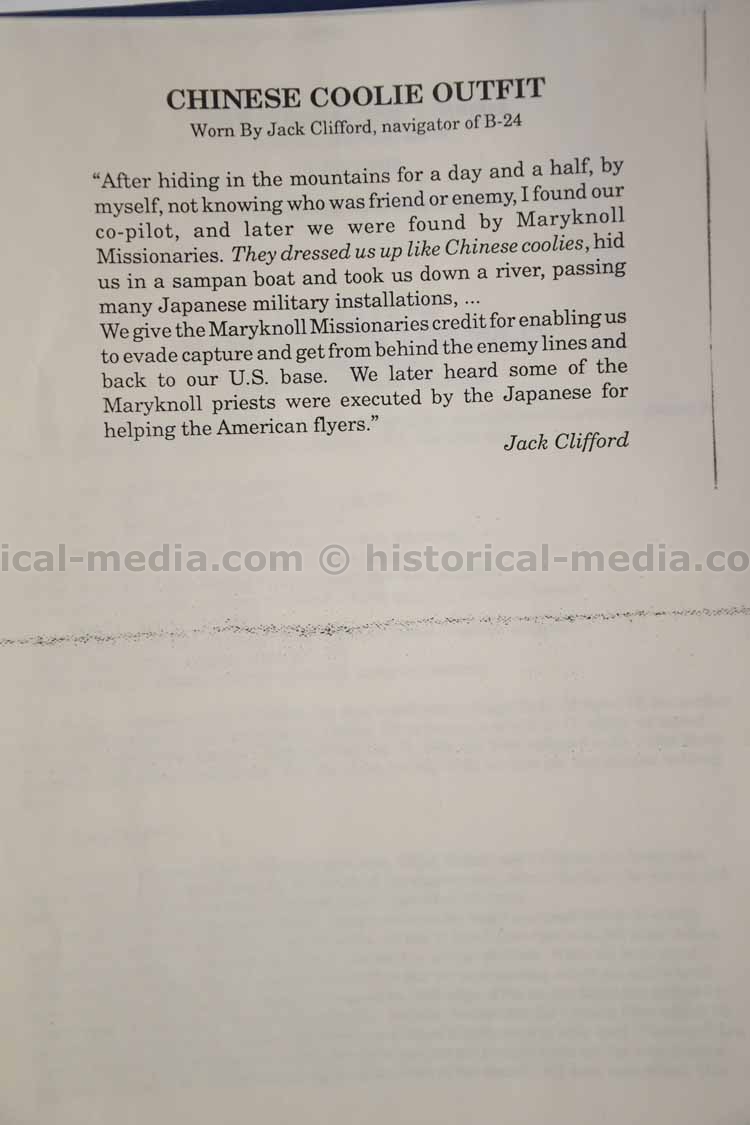 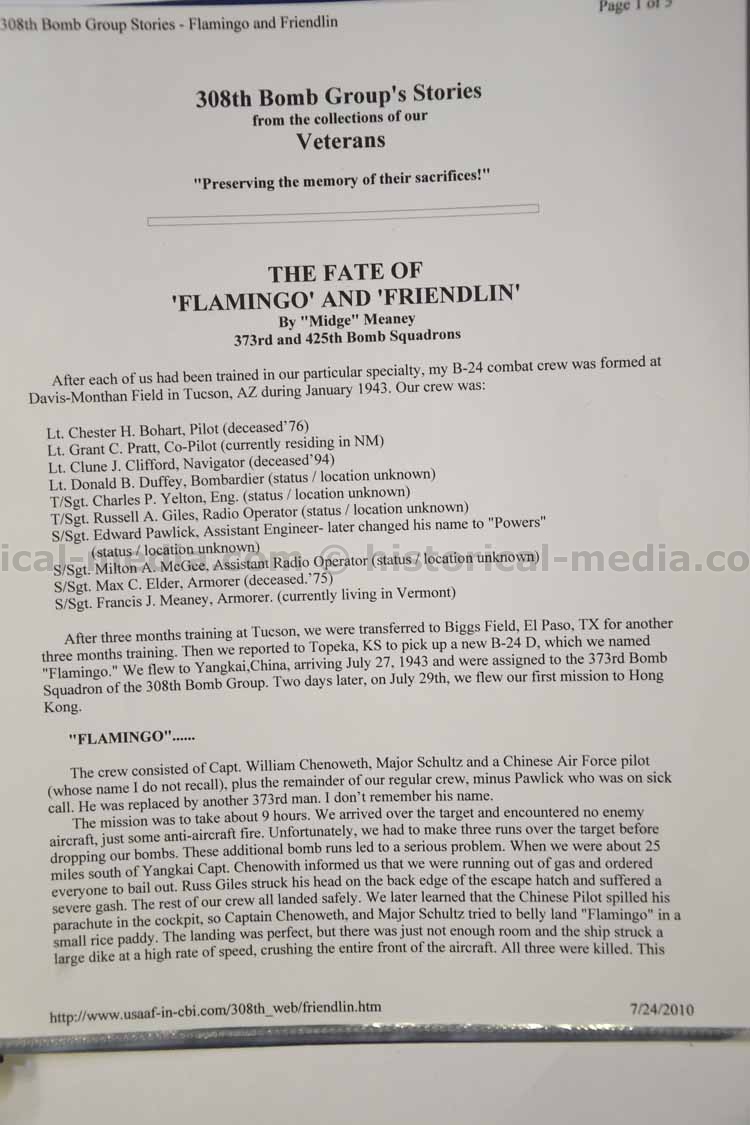 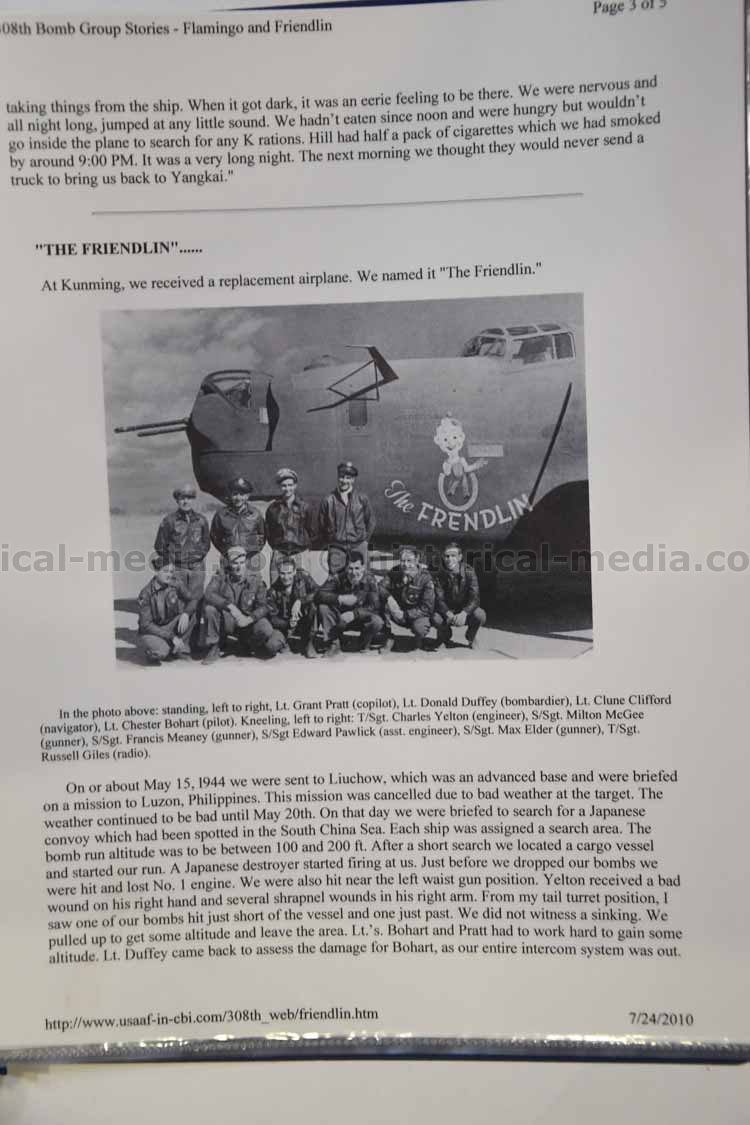 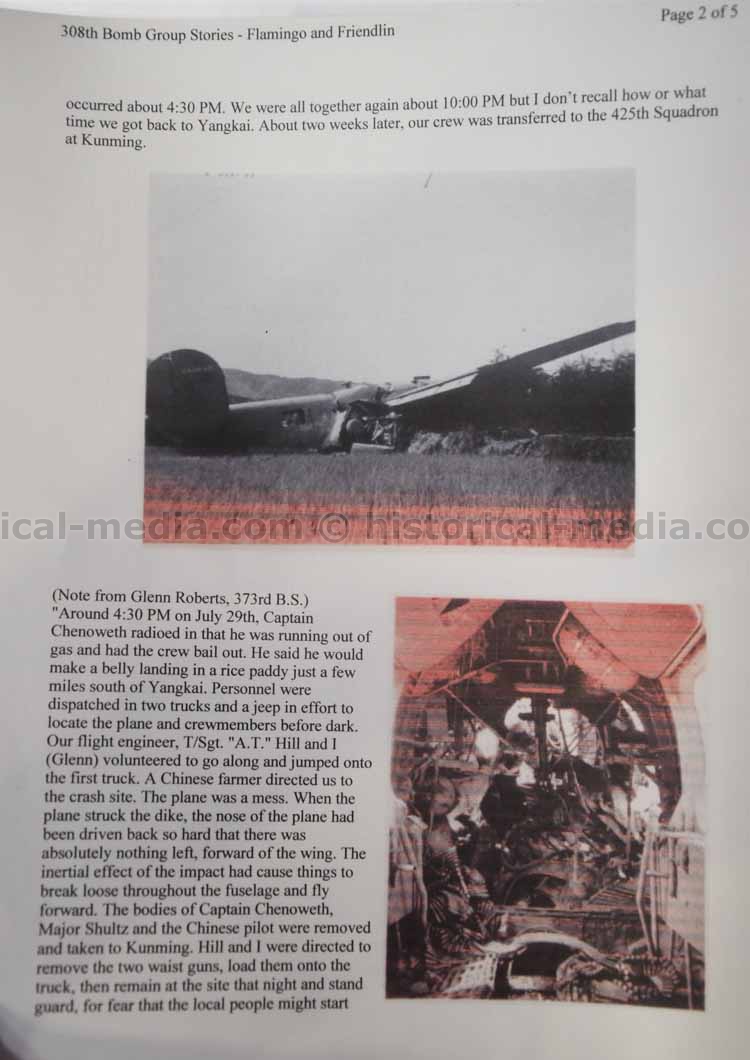 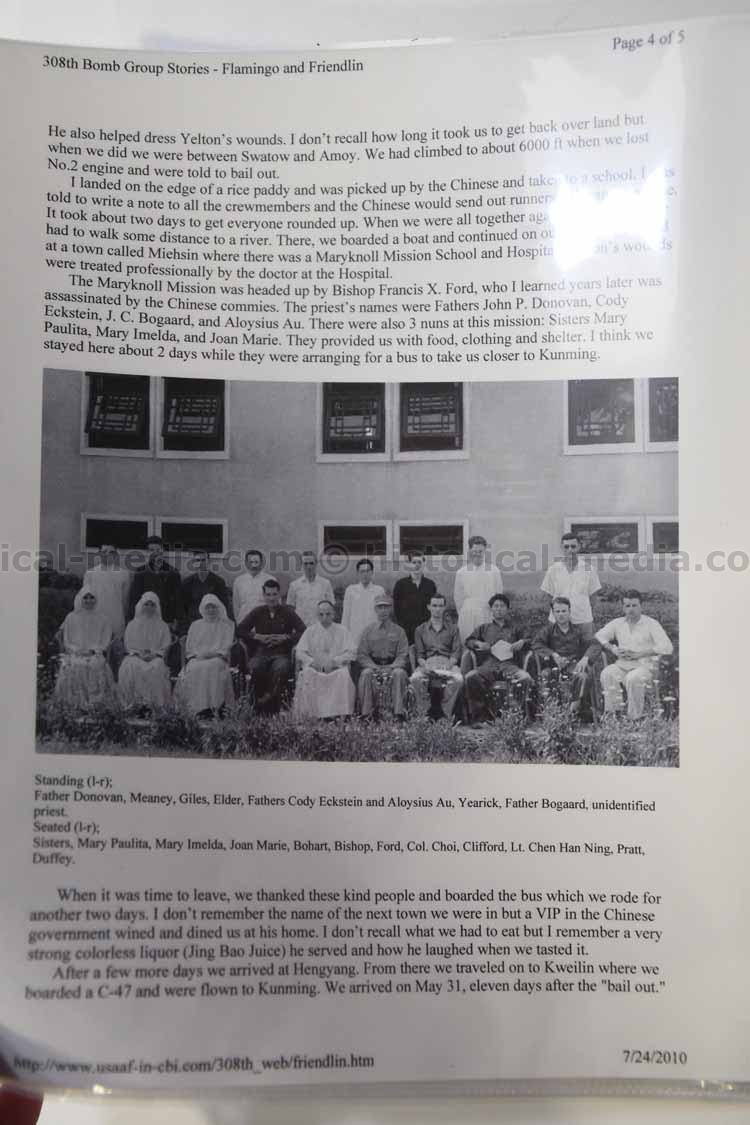 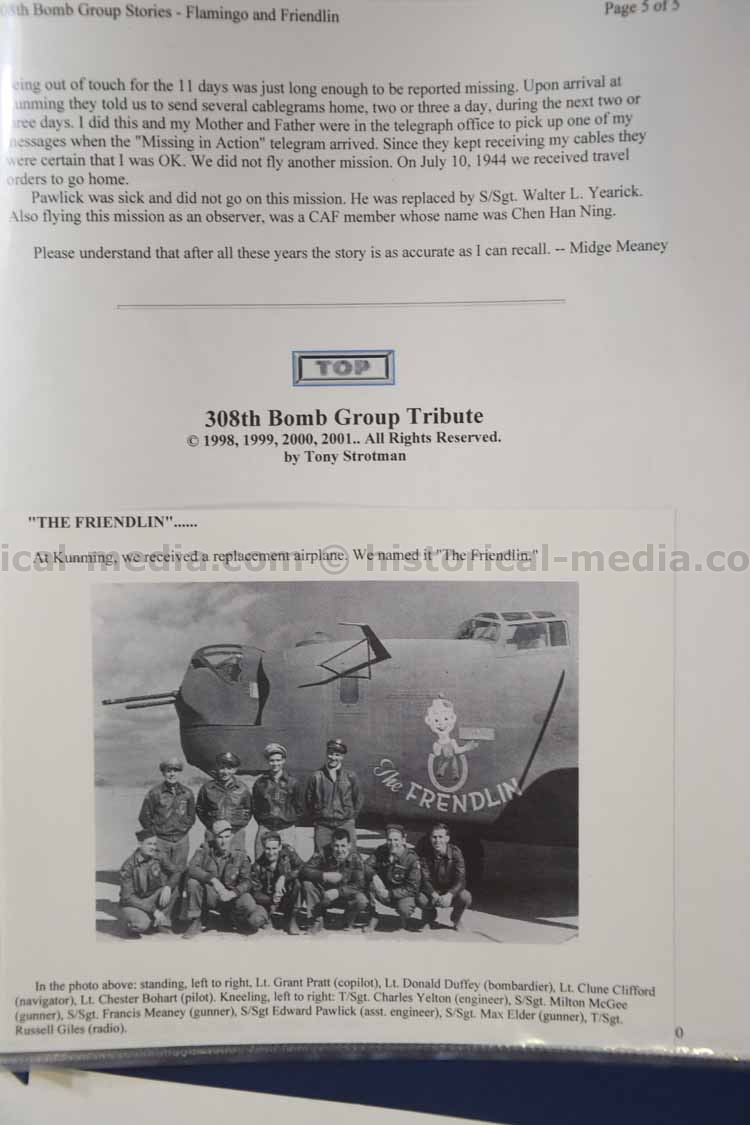 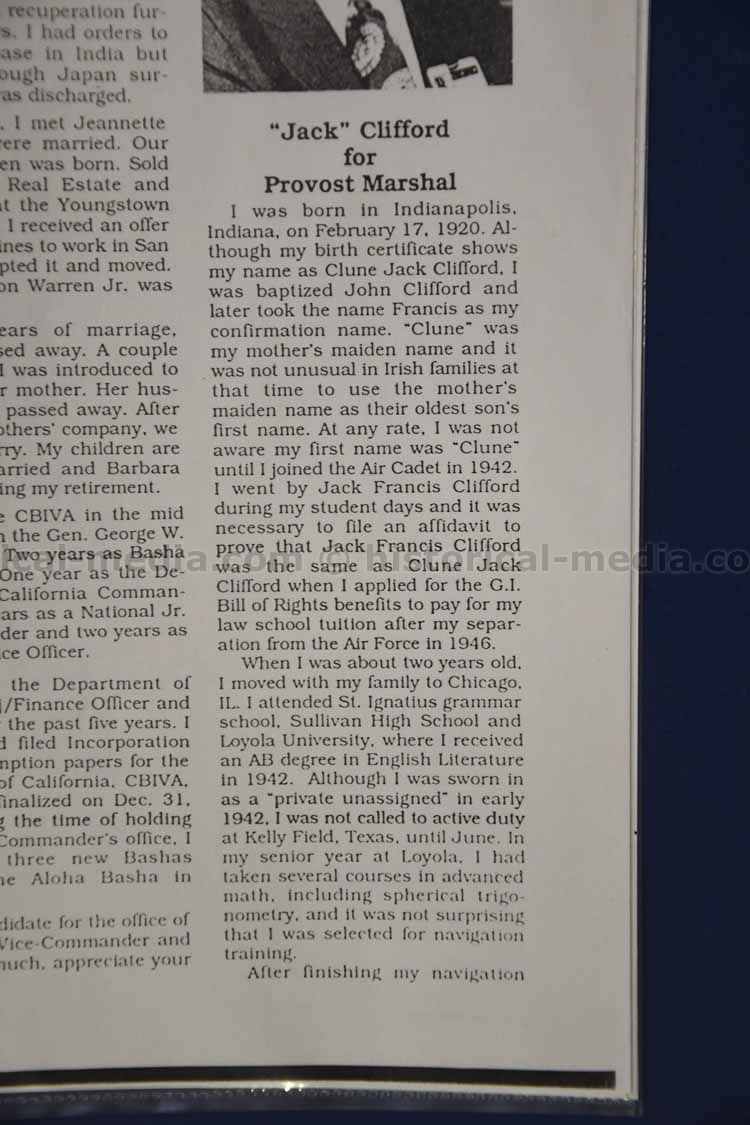 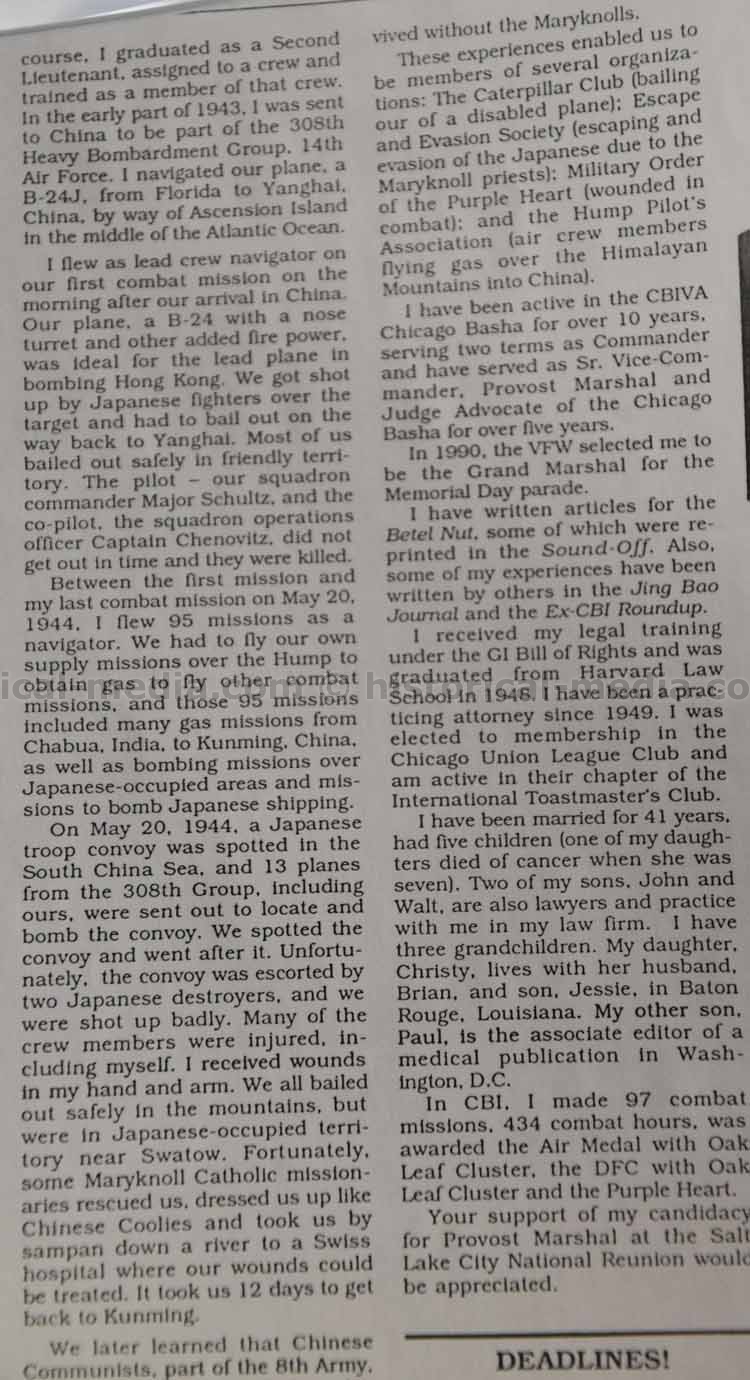 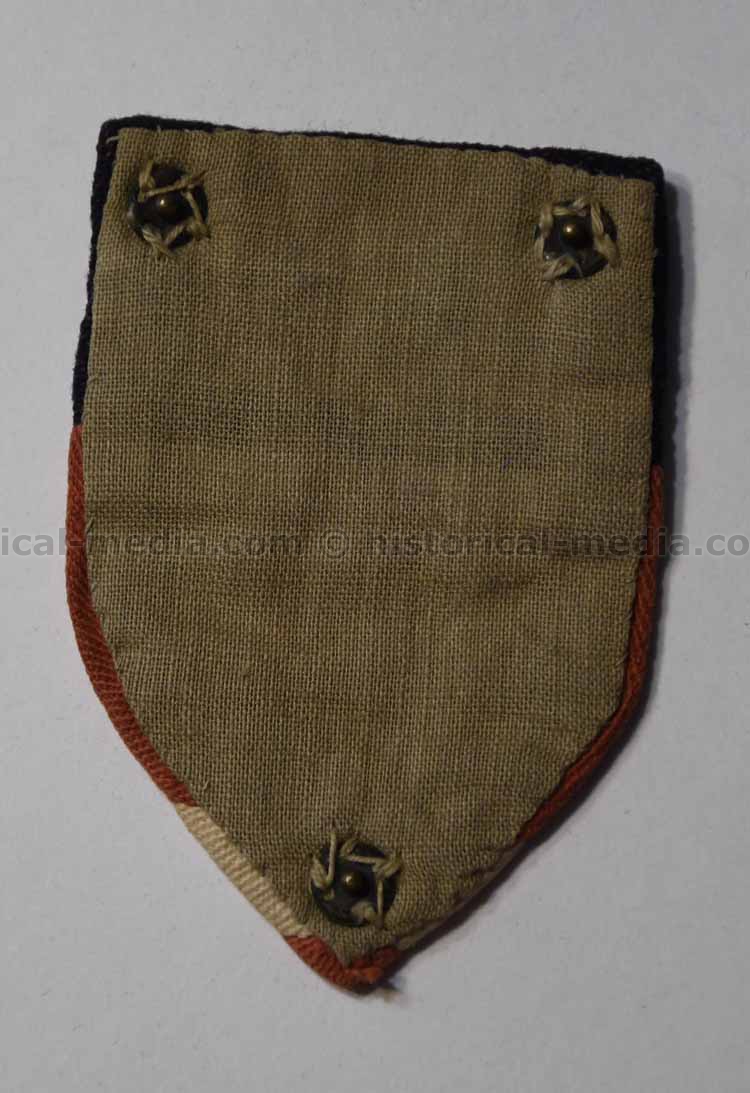