82.  FALLSCHIRMJAEGER KNIGHTS CROSS & OAKLEAVES WINNER Evaluation + Original HEILMANN & HEIDRICH Signatures!
Super document to FJ RK+ OAKLEAVES winner Leutnant (Later Major) HEINZ MEYER. Consists of his evaluation completed by famous FK General Ludwig HEILMANN - KNIGHTS CROSS & SWORDS winner - two signatures form him and one from HEIDRICH! Also comes with original photo on the document of Veith. He participated in some of the most significant campaigns in WWII - Kreta, Monte Cassino, Sicily and Normandy!
"Heinz Meyer volunteered for the parachute troops in 1937 and joined the 14th company of the "General Göring" regiment. As an ensign, he was transferred to the II. / Fallschirmjäger-Regiment 1 in early 1940 and took part in the western campaign as a platoon commander. Promoted to lieutenant on August 1, 1940, he joined the III. / Fallschirmjäger-Regiment 3 and took part in the Crete operation in May 1941. From October 1941 he fought in Russia and took over the leadership of the 10th company of the 4th Parachute Regiment on February 20, 1941. Promoted to Oberleutnant on August 29, 1942, he was awarded the German Cross in Gold on June 21, 1943. In mid-July 1943 he parachuted with his company over Sicily and fought in Italy from August 1943. Promoted to captain on November 1, 1943, he distinguished himself for personal bravery in the battles at Monte Cassino and was awarded the Knight's Cross on April 8, 1944. From April 1944 he led the III. / Fallschirmjäger-Regiment 4 and joined the III. / Fallschirmjäger-Regiment 15. From July 1944 he and his men were on defensive duty near St. Lo, where he was severely wounded on August 4, 1944. On November 18, 1944 he was awarded the Oak Leaves. On January 1, 1945 he was promoted to major and after his recovery in April 1945 again commander of the III. / Fallschirmjäger-Regiment 15. At the end of the war he was taken prisoner in the Harz mountains."
$1500 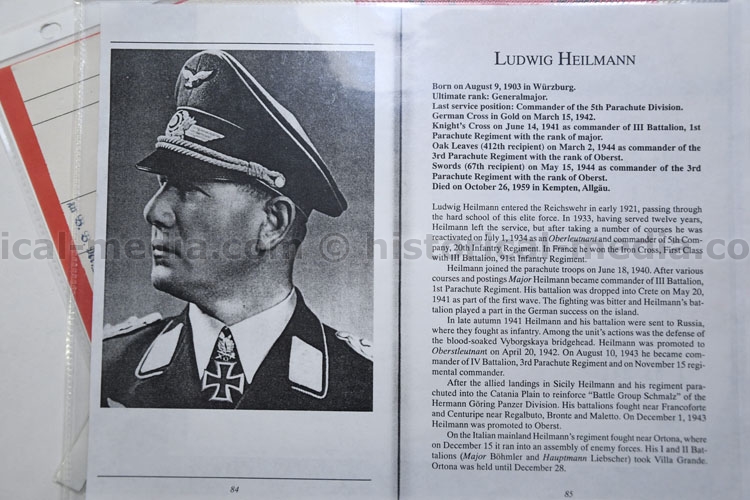 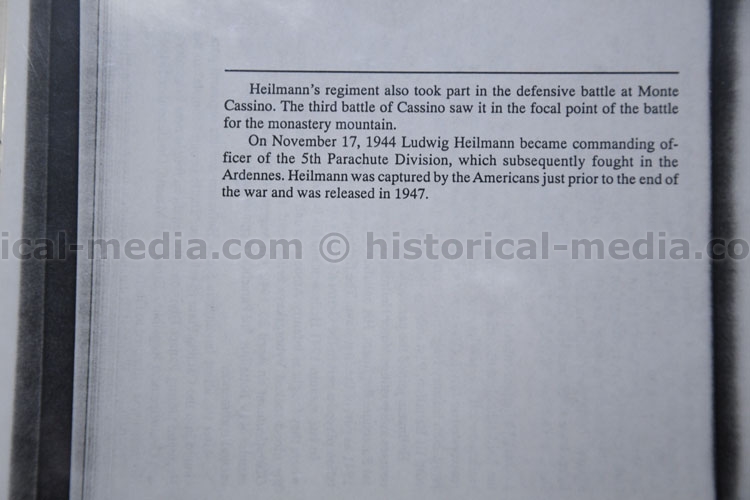 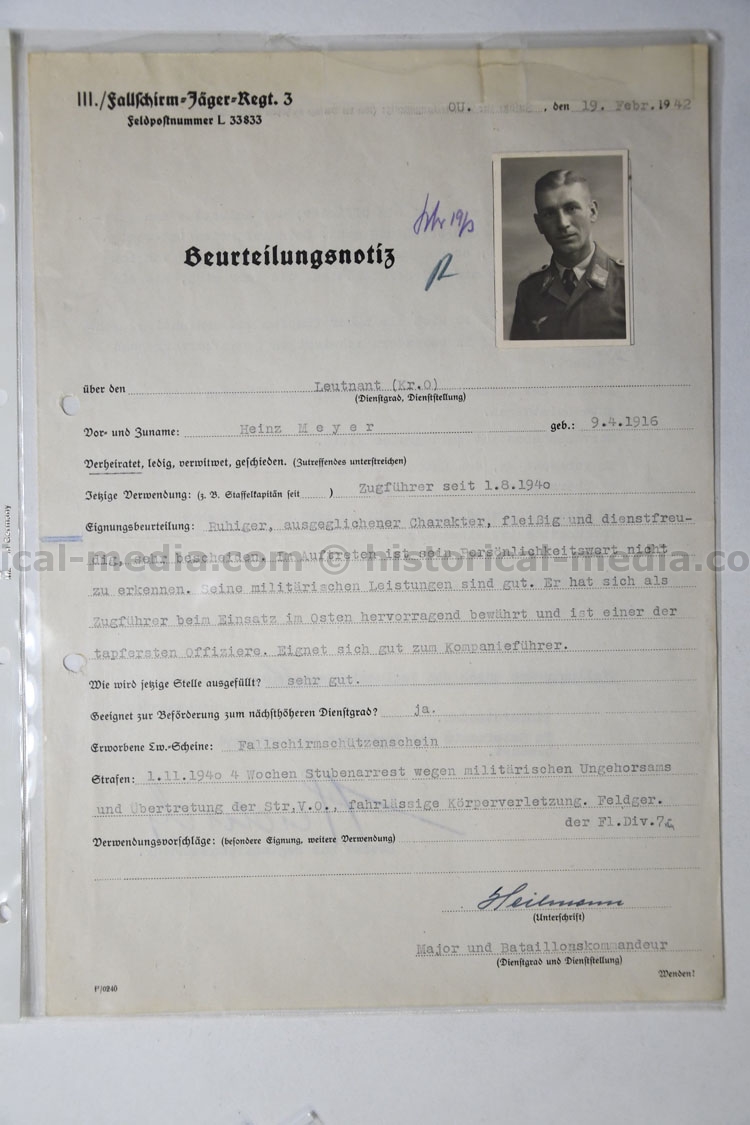 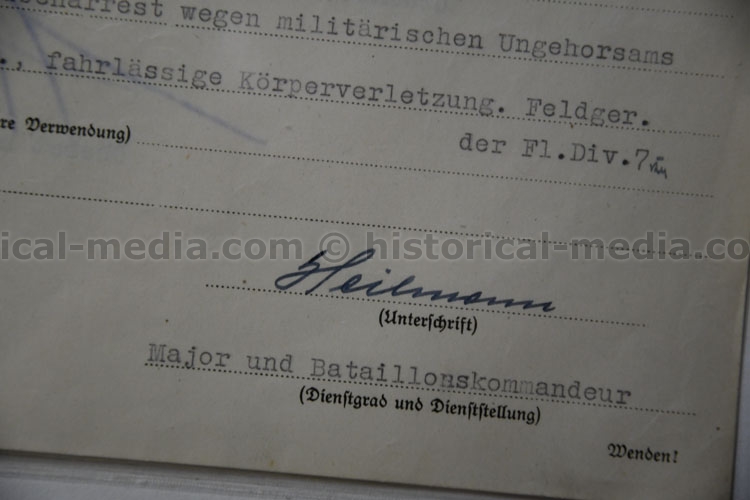 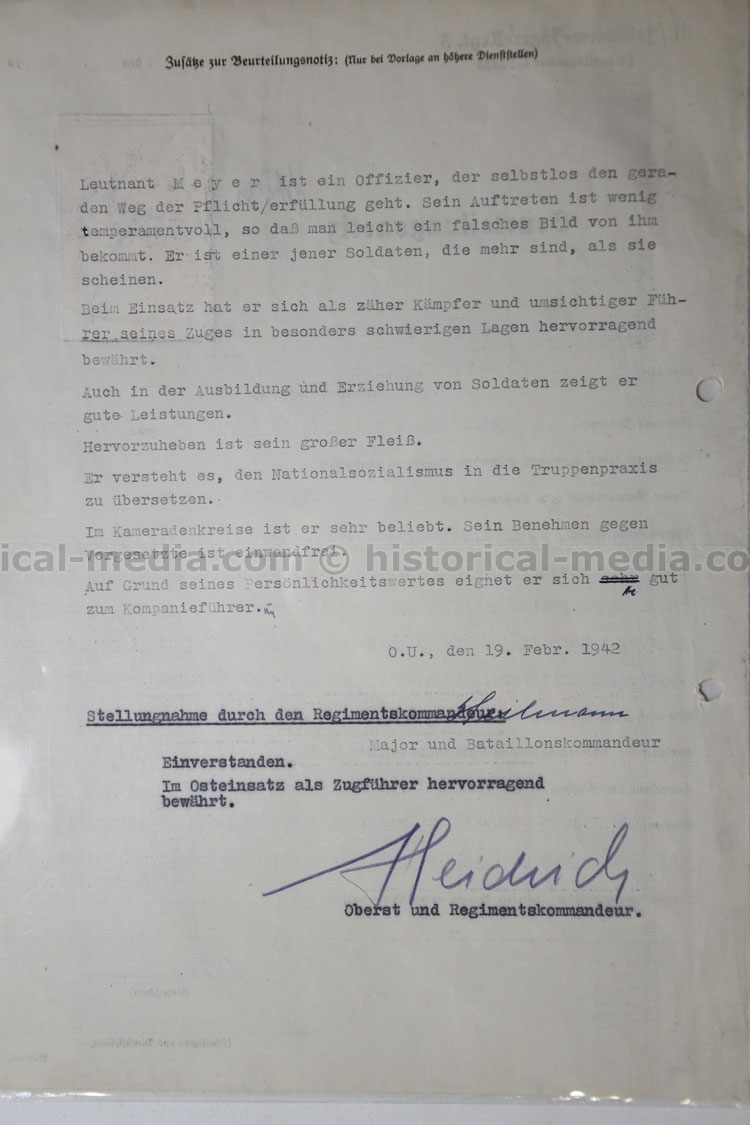 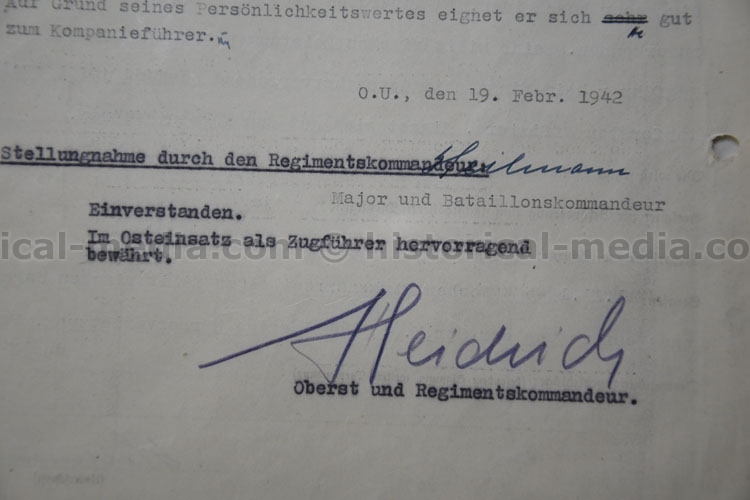 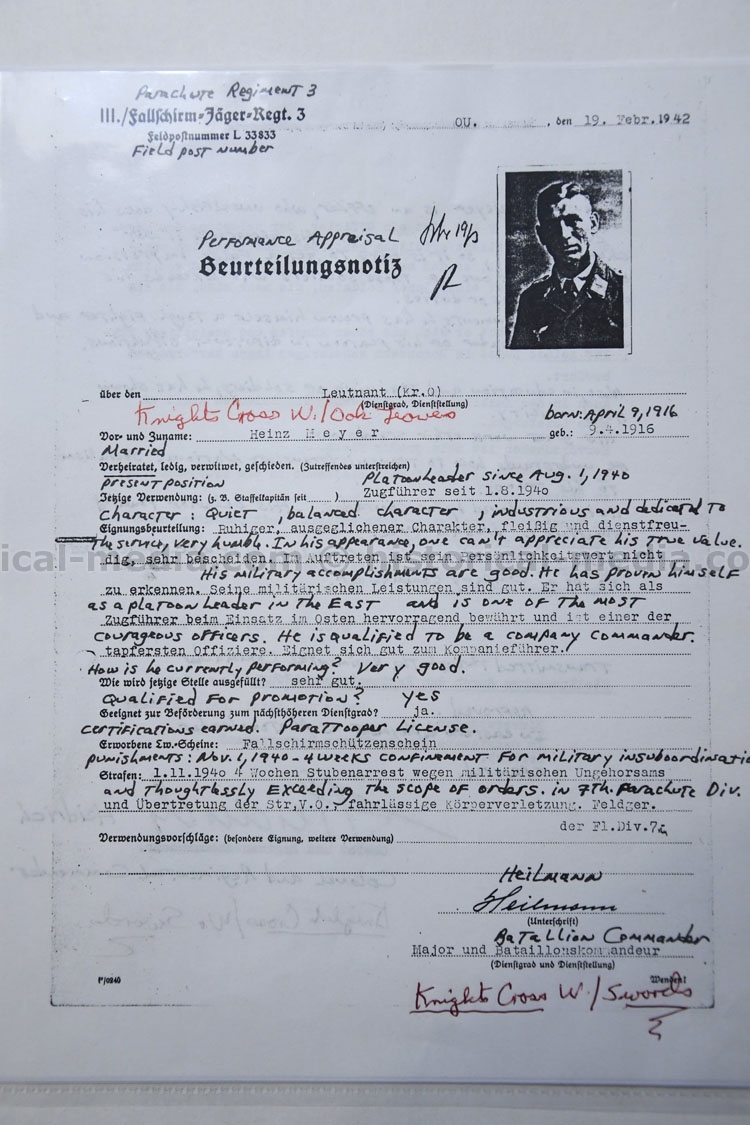 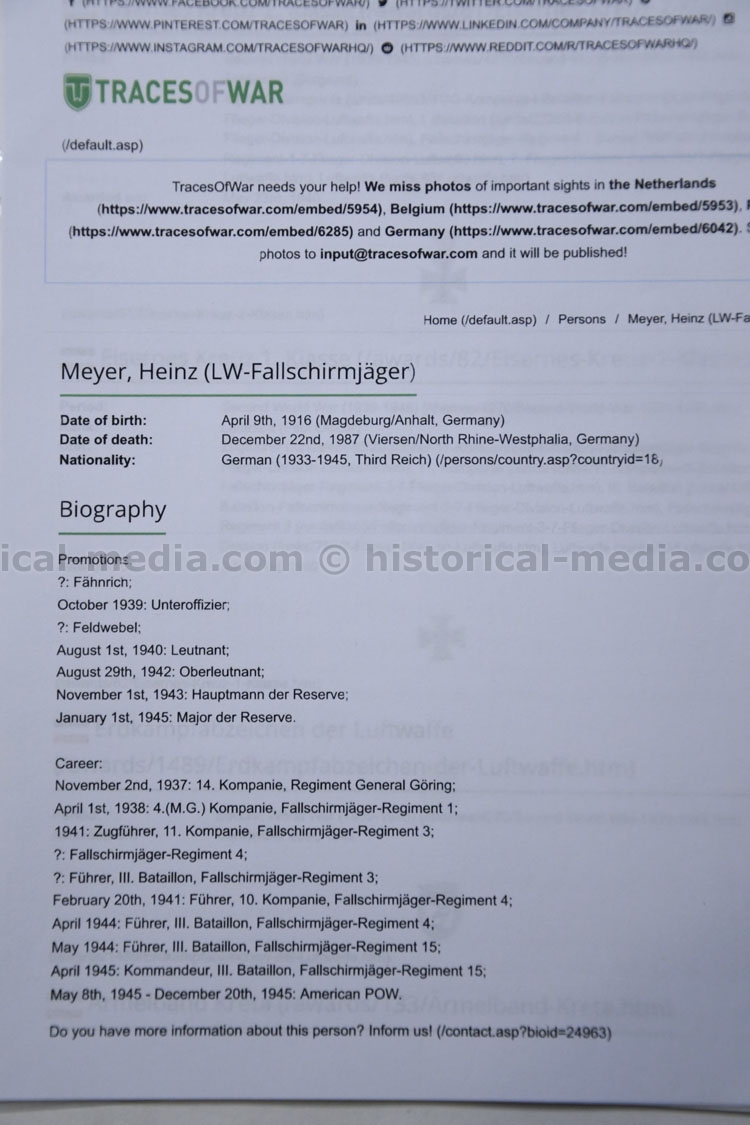 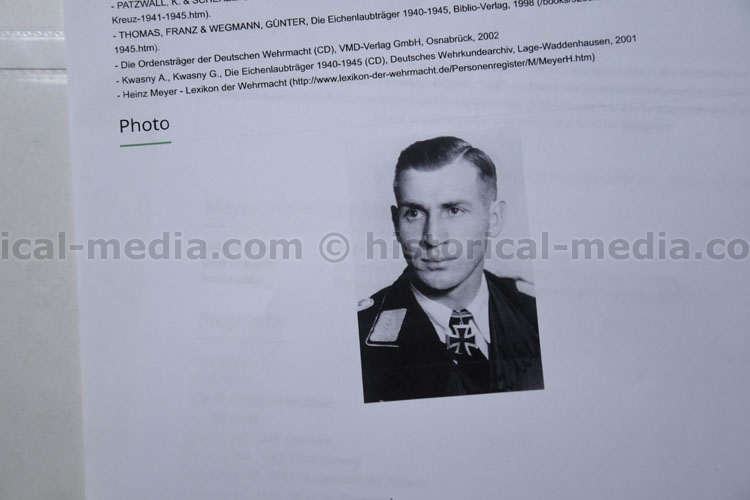 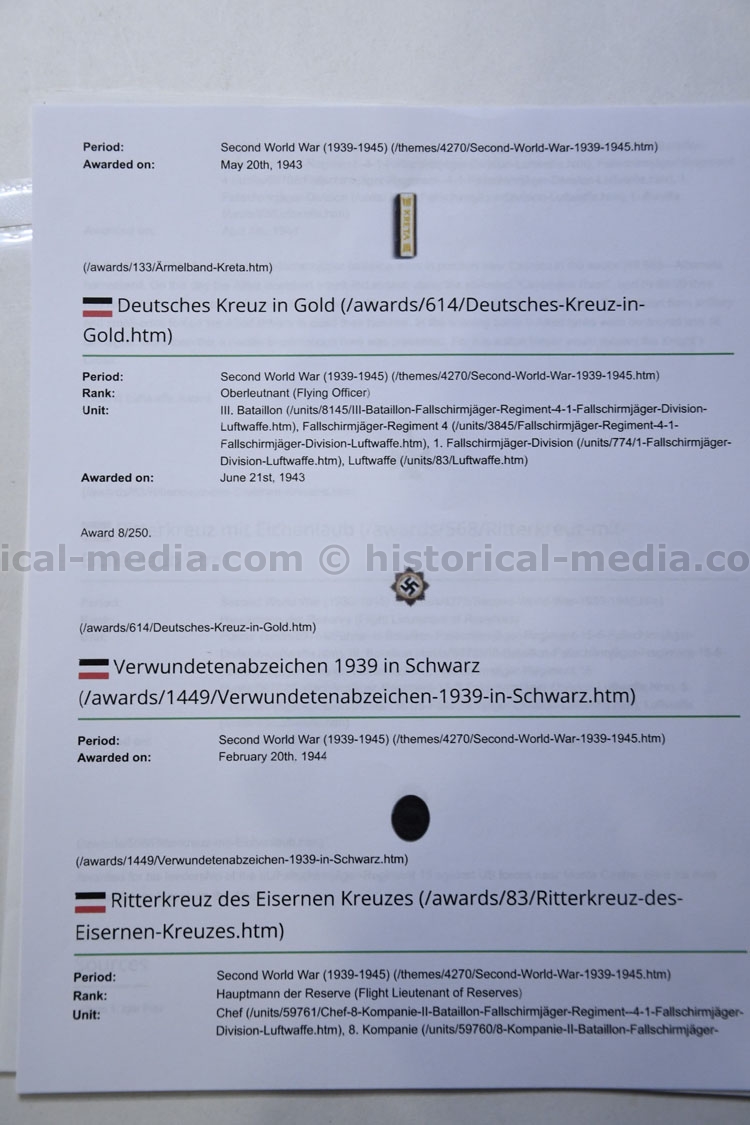 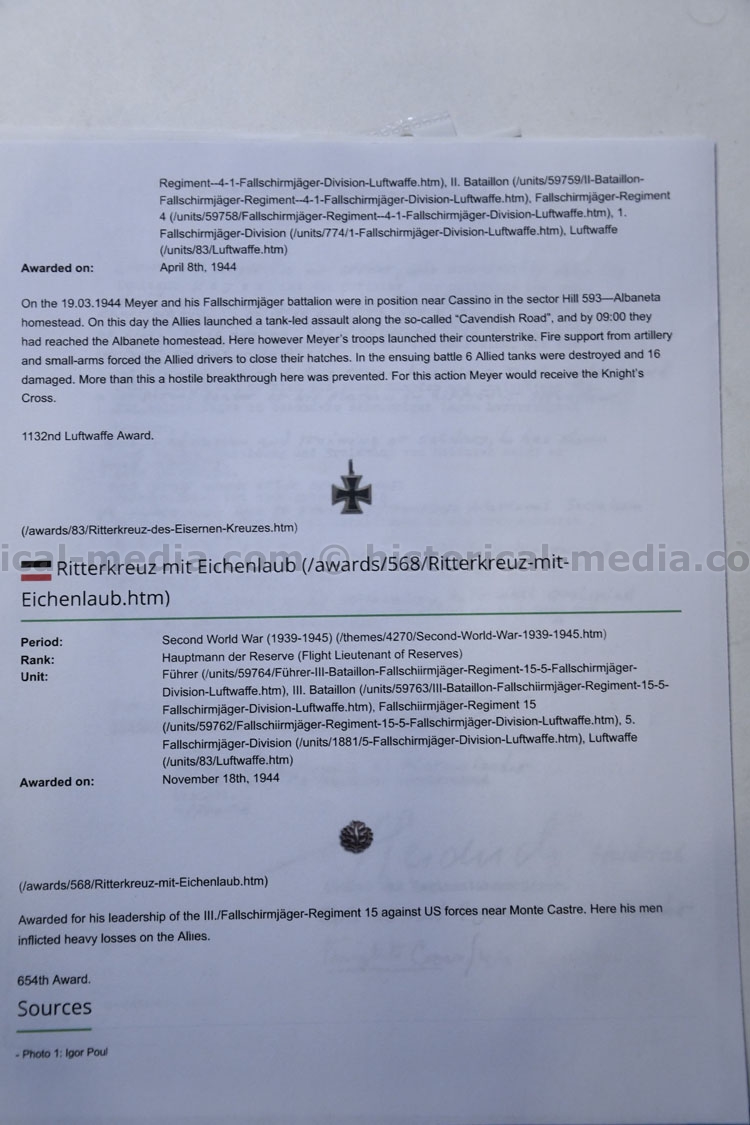