168.  WWII Air Medal & Purple Heart Grouping- KIA OPERATION VARSITY - March 24, 1945 - GERMAN SNIPER KIA!
Original wartime government engraved AIR MEDAL & PURPLE HEART grouping to Cpl. Elmer A. MILCHAK (ASN: 33706583). He was KIA on March 24, 1945 while flying as Right Waist Gunner on a mission with in B-24 42-50709 of the 392nd Bomb Group, 576th Bomb Squadron. This was a mission to drop supplies to troops in support of OPERATION VARSITY! He is buried in Netherlands American Cemetery in Maegraten, E31. the Pilot of this mission, John Hummel, received the DFC for staying with the plane and crash-landing it in a German forest near Wesel and was captured.
"As we approached the drop area, we found that there was considerable smoke or haze covering the area. We began getting a little small arms fire during the supply drop run, for we could hear it hitting the plane. our Radio Operator, James Deaton, stood at the entrance of the bomb bay, waiting for the drop, so he could enter and pull the static lines. We made our drop. At the time of our drop we had slowed our air speed and with 2 engines out at this speed we could not gain altitude. Jack picked out the first field he could find, which also contained the remains of some gliders, so we could make a controlled crash. Elmer Milchak had been killed as he was coming out the waist window of the plane. He was the first one out after the crash.” [According to an account by co-pilot 2/Lt Reynolds in The Liberators Who Never Returned]
$850 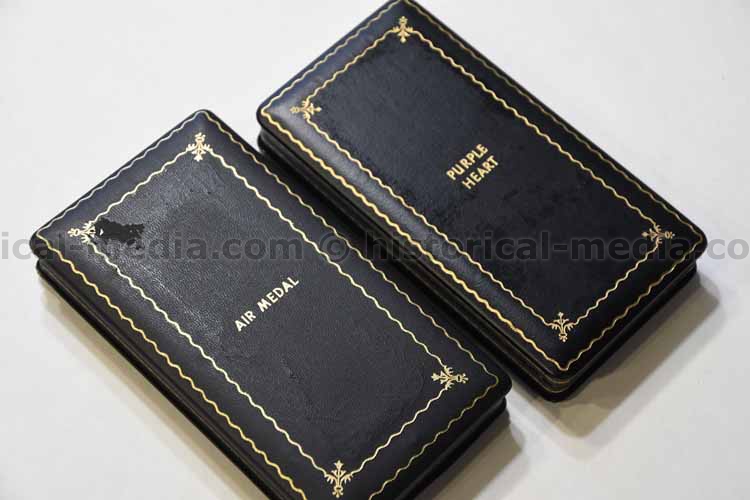 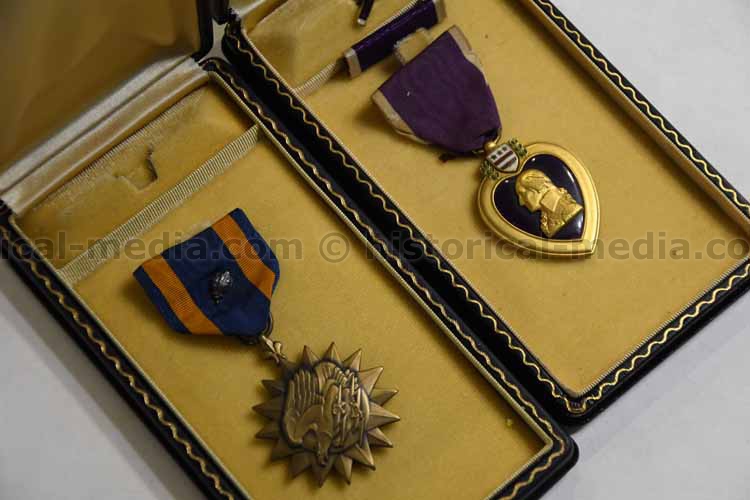 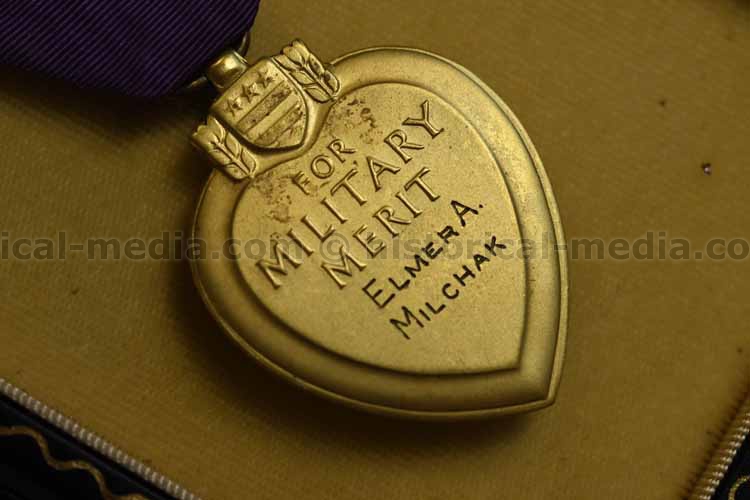 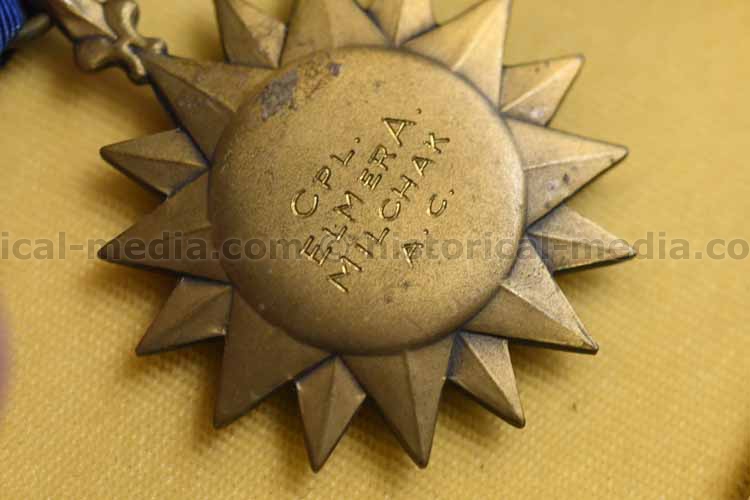 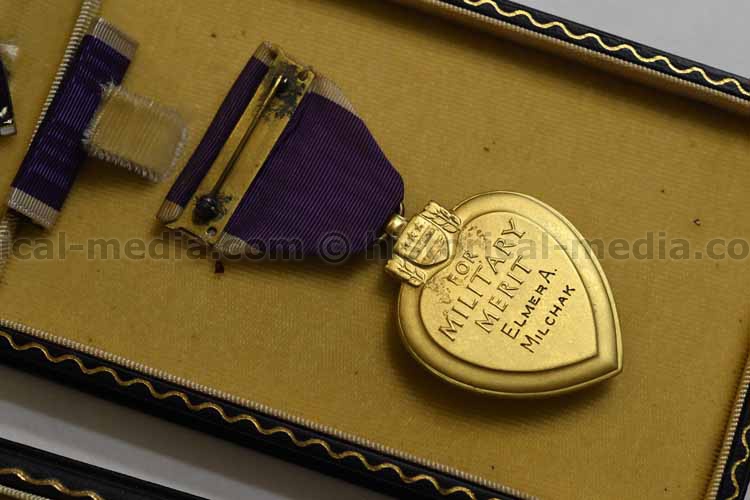 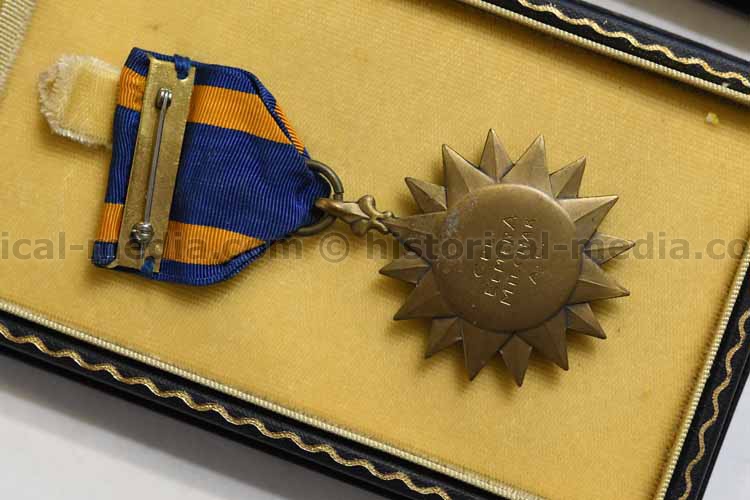 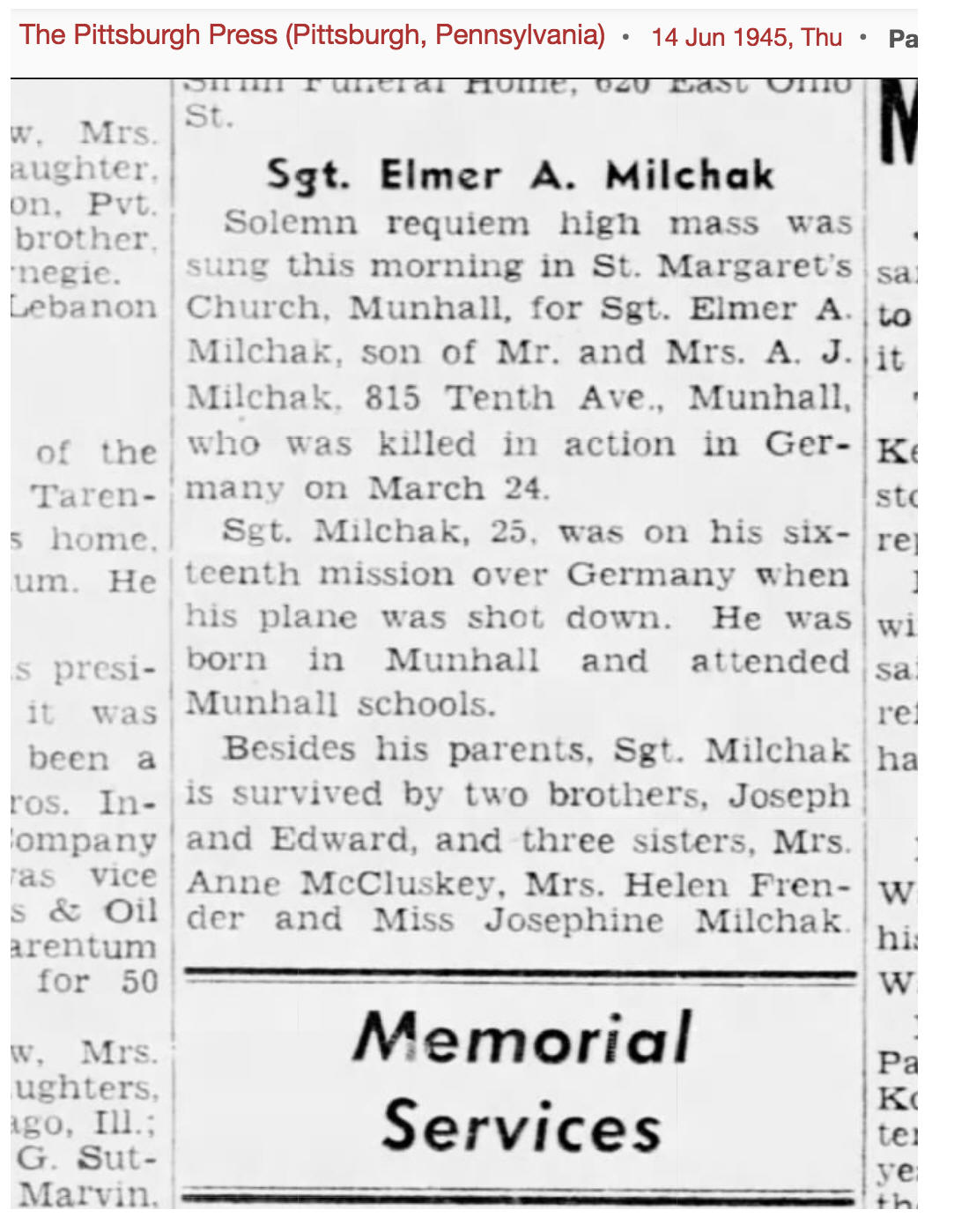 According to an account by 2/Lt Reynolds in The Liberators Who Never Returned:

As we approached the drop area, we found that there was considerable smoke or haze covering the area. We began getting a little small arms fire during the supply drop run, for we could hear it hitting the plane. Our radio operator, James Deaton, stood at the entrance of the bomb bay, waiting for the drop, so he could enter and pull the static lines. We made our drop. James entered the bomb bay and that is when we started receiving intense ground fire from, what we later learned to be, 20 mm and 30 mm shells. Jack [Hummel] was flying the plane at the time, and I kept glancing at the instrument panel for any signs of engine trouble. Shells kept hitting the aircraft, and suddenly I noticed fire coming from number 3 engine. I hollered at Jack and told him engine number 3 was on fire and I was going to shut it down. All of the switches were on my side of the cockpit. I feathered the engine, cut off the gasoline supply to that engine, closed the cowling flaps and cut the electrical switches. The fire continued to burn. Jack hollered that number 2 engine had been hit and oil pressure was dropping. At the time of our drop we had slowed our air speed and with 2 engines out at this speed we could not gain altitude. Jack used what air speed we had to pull the airplane up to around 500 feet and hit the alarm bell button for everyone to "bail out". He and I both knew there was no way we could get out before the plane crashed. I remember saying a short prayer, "Lord, it is all up to you now." Jack picked out the first field he could find, which also contained the remains of some gliders, so we could make a controlled crash. The fire on number 3 engine continued to burn and just before we crashed Jack hollered for me to get on the rudders with him so I never saw the fire in number 3 engine go out….

I have no recollection of the crash after the airplane touched down, so I must have been knocked out for a few seconds. The first thing I remember was Jack asking me if I was hurt. I replied, "I didn't get a scratch" and he replied, "Oh, yes you did." I then realized blood was running down in my face and the front of my flight suit was bloody.

The crash had torn a large hole in the plane on my side of the cockpit. I crawled out through it and Jack followed. We stood about 20 feet from the plane and examined each other's wounds. Jack had a bad cut on the back of his head that was bleeding, and I had a cut on my forehead that was still bleeding. As we stood there, we noticed the ground kicking up about us and heard gunfire, but we did not realize we were being shot at…

As we stood examining our wounds, we heard voices coming from behind and realized, for the first time, that the crew had not "bailed out". We saw Hollis Powell, Paul Keagle and Herb Finney standing beside what remained of the plane. We noticed Elmer Milchak was leaning out the waist window. They had all been in the back of the plane. Usually Herb Finney would have been on the flight deck with Jack and me since he is the flight engineer, but for some reason he was in the back, and fortunate for him, for it is doubtful he would have survived the crash, since the top turret fell just where he would have been standing.

We were getting rifle fire from soldiers that were shooting and walking toward us. There was also a German "Tiger" tank about 50 yards from us. The firing stopped after one of the crew opened a parachute and waved it at the Germans who were shooting at us.

We walked over to the crew and found out that Elmer Milchak had been killed as he was coming out the waist window of the plane. He was the first one out after the crash. Our concern then was about Barney Knudson and Ellis Morse, who were in the nose of the aircraft, for we knew there was no way they could have survived the crash. Also, James Deaton who had been standing in the bomb bay getting the static lines in after the drop."

INDIVIDUAL ACCOUNT OF CREWMEN'S FATE. Surviving crewmen agree that Elmer Milchak was killed by a German sniper as he was leaving the plane via the waist window.

Tail gunner Powell recalled that after the plane finally came to a stop:

"He lay there for a second or two. I saw Milchak look out the waist window and then pulled back and looked at me and asked, "Powell, are you alright?" I said, "Yes." I felt no pain or lack of movement. He looked out the window again after he had turned to Finney and said, "Powell's okay." Those were his last words as a sniper (about 150 yards away in a wood thicket) shot him through the head and he slumped over the window edge." As reported by Mr. Loncke, copilot Reynolds remembered that "German soldiers arrived and Elmer's body was removed from the plane, for there was still danger the fire would catch up and the plane would burn, which it did after we got away. The best we could determine, the 3 missing crewmen, James Deaton, Bernard Knudson and Ellis Morse were not in the plane. Before the soldiers led us away, I said the 23rd Psalm over Elmer Milchak's body."

They were taken to a farmhouse occupied by German soldiers, some of whom were shooting at B-24s as they flew overhead. In just a short time, the airmen were rescued by US soldiers from the 513th Paratroop Division. Powell said, "Afterwards we went outside and the airborne and glider troops were talking around, smoking and joking while a sniper was taking pot shots at us. Me? I'm under a German half-track or something, praying to be gotten out of this mess. Flak, high altitude, fighters whatever, I'll take, but this is not my kind of activity yet these airborne seem like it's just a walk through the woods."

Powell thought that he had seen two parachutes moments before the crash, most likely Knudson and Morse bailing out of the nose position. He estimated their altitude was only about 300 feet at the time. Powell "later found out that Deaton had either fell or been hit by rifle fire as we were over enemy territory." The day after the crash, at a U.S. aid station, Powell said they "were wondering what had happened to Deaton, Knudson, and Morse. The latter two had jumped we knew but no one had seen Deaton jump. Then all of a sudden coming across the field with one flight boot on and carrying the other here comes Morse and he was a sight for sore eyes. He said Knudson had been killed on the ground."

In his report, now part of the MACR, nose gunner Sgt. Morse related:

"....the ship in which I was flying was hit by flak. At that time, Lt. Hummel, the Pilot gave the signal to bail out. The Navigator, Lt. Knudson, then opened the nose turret doors and pointed to the escape hatch as a signal to bail out. As I came out of the turret, he put on his chute and left the ship. I saw his chute come out of the pack but did not see it open. I later asked American ground troops who had seen me bail out if they had seen any other chute come out of our ship, but, they could give no further information...."

Within a day or two, Powell said, they were flown back to Wendling where they were "debriefed and given a 10-day R and R in Southport England. Then back to the base where we took a flight in the "Black Widow" under supervision to see if we still had the nerve to fly - we passed - and were back to flying missions."

It should be noted that Pfc Stuart S. Stryker, 513th Parachute Infantry Regiment, was posthumously awarded the Medal of Honor for his action this day. His citation reads, in part, "His gallant and wholly voluntary action in the face of overwhelming firepower …so encouraged his comrades and diverted the enemy's attention that other elements of the company were able to surround the house, capturing more than 200 hostile soldiers and much equipment, besides freeing 3 members of an American bomber crew held prisoner there. The intrepidity and unhesitating self-sacrifice of Pfc. Stryker were in keeping with the highest traditions of the military service."

Sgt Milchak is buried in the Netherlands American Cemetery at Margraten, The Netherlands, in Grave E-3-1; he was awarded an Air Medal with Oak Leaf Cluster. 2/Lt Knudson and Cpl Deaton were later returned to their home towns for burial.

CASUALTIES NOT LISTED IN MACR

There was one final casualty this day, aboard aircraft #42-52770, Ruptured Duck. This ship had received heavy ground fire and two of the crew were wounded. Pilot 2/Lt Lester Frazier landed at a U.S. airfield at Sint-Truiden, Belgium, so his men could get medical attention. He later said the bottom of the B-24 looked like a sieve from all the gunfire.

The injured airmen were treated at the 40th Field Hospital. Radio operator S/Sgt Hervy V. Latour had been wounded in the arm and back while waist gunner S/Sgt Raymond Hamment's arm was badly shot up. S/Sgt Hamment died of his injuries later that day at 298th General Hospital in Liege, Belgium. He was buried on 27 March 1945 at the US Military Cemetery at Neuville-en-Condroz, Belgium, but was returned to the US after the war for final interment in Flint, Michigan. He had been awarded the Air Medal with two Oak Leaf Clusters. 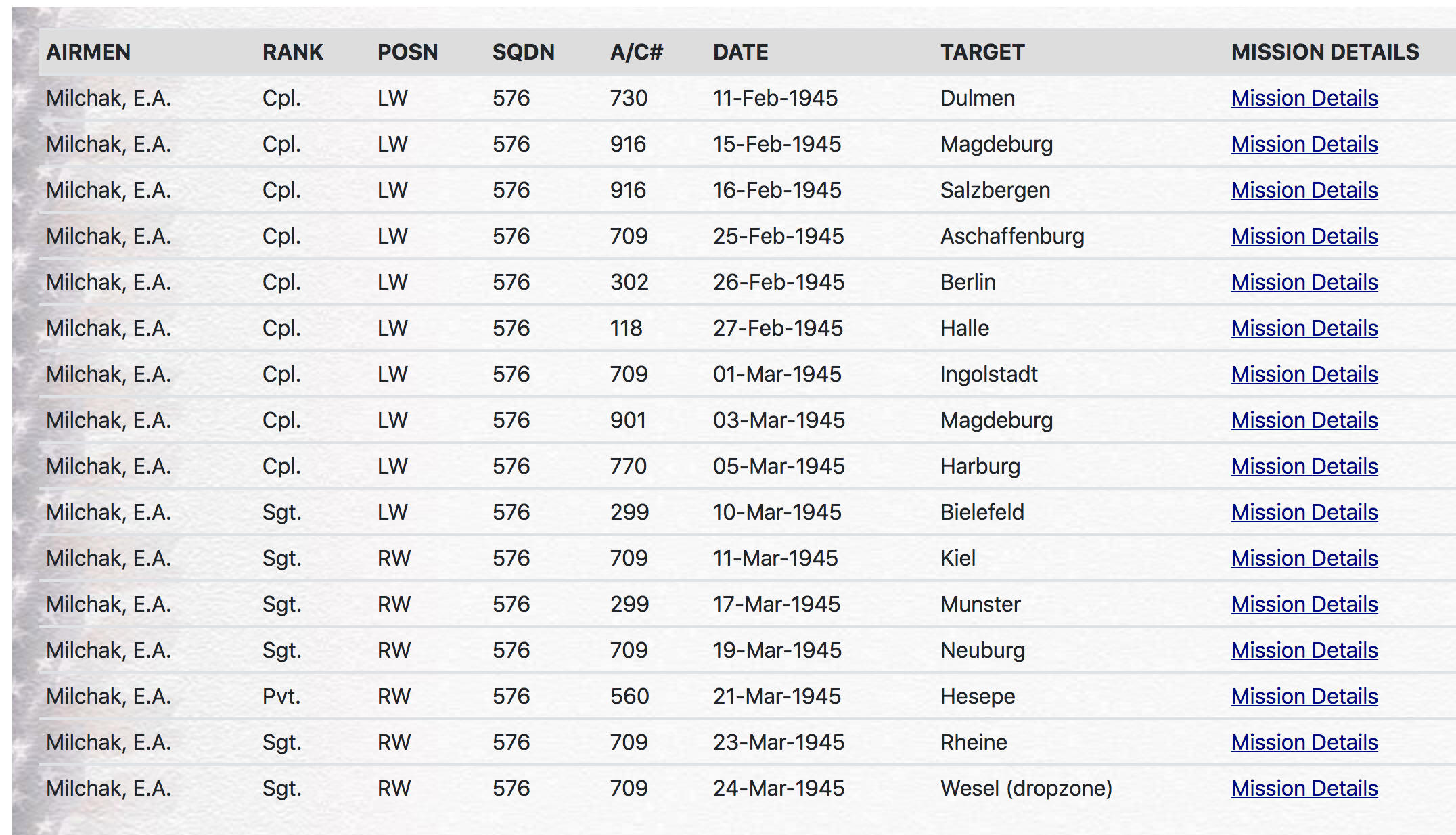 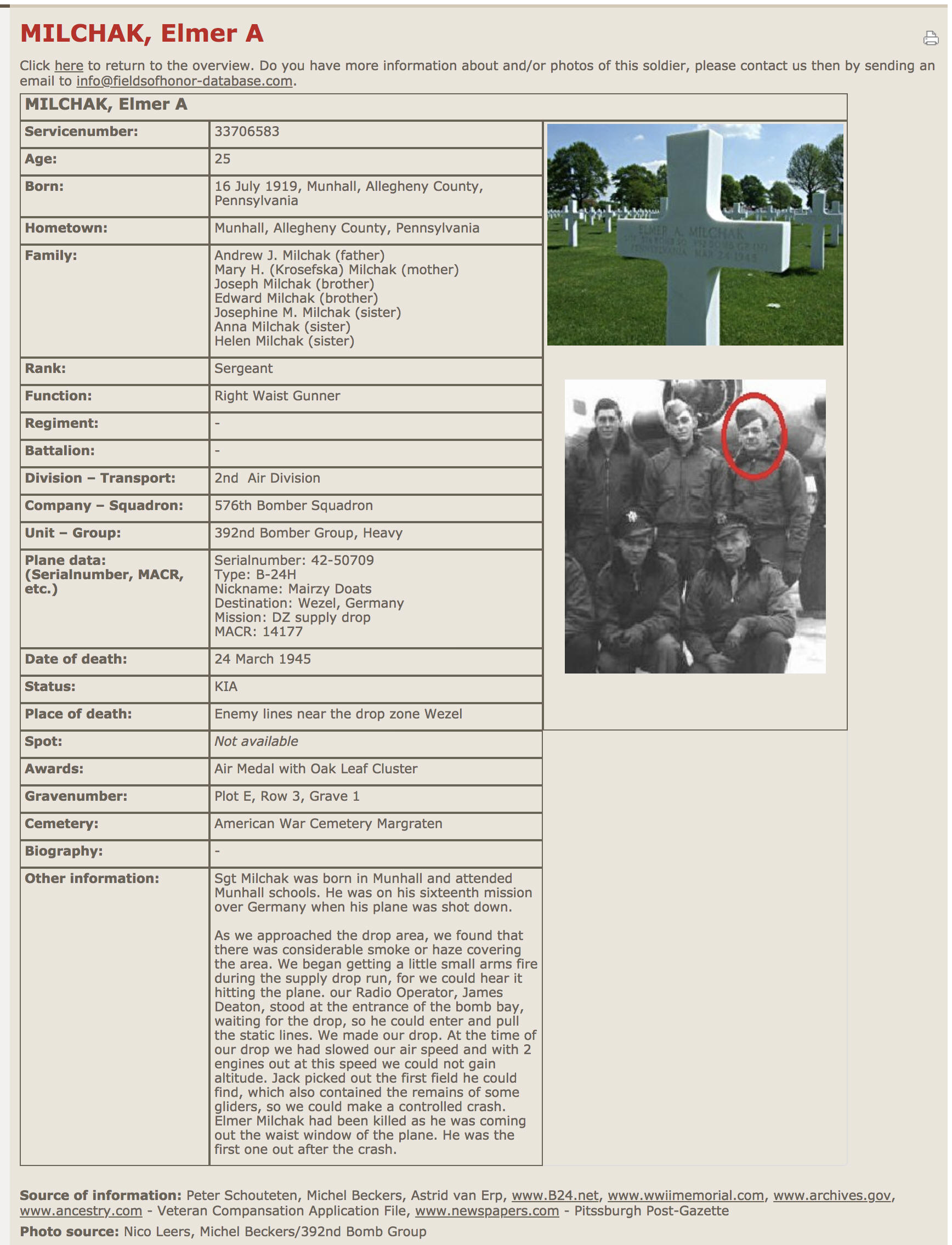